Building Memories, One Building at a Time

My wife and I were in northeast Iowa last month for a wedding, and I found some extra time to stop in Fayette to take in the beauty of my old stomping grounds, Upper Iowa University. I strolled around campus and snapped photos of the familiar scenes that became a home away from home when I first arrived almost 18 years ago. As I moseyed around campus, I gazed at the university buildings and had an influx of good memories with great friends. Let’s stroll down memory lane and relive some of those good times, along with a little UIU history, too. 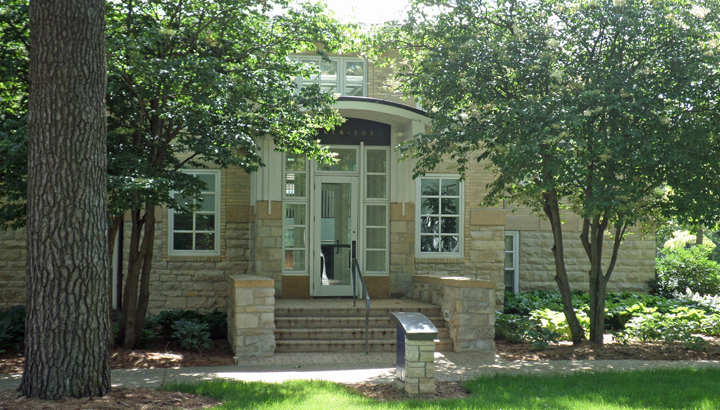 Parker Fox
Parker Fox is where my UIU journey began. My mom and I walked through these doors in the summer of 1996 for a campus visit. I still remember it clear as day because as we walked down the steps inside the building, there was a black sign with white letters that had my name along with “Welcome to Upper Iowa University.” Am I easily amused? Sure. But I’m not ashamed to say that a simple sign helped make me a Peacock.

Alexander-Dickman Hall
Simply referred to as “AD,” Alexander-Dickman is the university’s original building and has been known over the years as “Old Sem,” “Old Main,” and “College Hall.” Construction began on it in 1855. To put that in perspective, imagine male students walking by this still-new building in 1861 as they left to fight in the Civil War. Those “University Recruits” served the Union Army well, most notably at the Battle of Shiloh.

The university president’s office is located in AD. During my freshman year, cuts were made to the sports information department (which happened to be where I earned my precious work study checks). So as a writer for The Collegian (UIU’s newspaper), naturally I wanted to interview the head honcho about this fiasco. I set up an appointment and chatted with him in his office. Long story short, I wrote a scathing editorial and the prez wasn’t exactly my buddy after that. But I stood up for some loyal people in that editorial, and I’m glad I did.

Green Goddess
The Green Goddess, perched atop Alexander-Dickman, has been a UIU icon for more than half a century. Originally installed at the Black Hawk County Courthouse in 1907, the Green Goddess was removed in 1963 during the building’s demolition and leased to Upper Iowa for a steal of a deal: one American dollar.

I recall staring up at the goddess countless times during my walks to and from class. No matter how many times you ogled her, she always looked majestic. And she still does today. Pretty good for a woman who turned 108 this year.

Garbee Hall
Garbee was the main dorm building, named after a former UIU president who was known for cooking up opossum and other wildlife in the 1950’s and 1960’s.

Garbee is (obviously) where we spent most of our time. Along with the frequent, ummm, “social gatherings” inside, the outside steps became a regular location for grilling out and chilling out. If you look closely at the steps, I’m sure you can see some stains that were created during the 1997-2001 era. 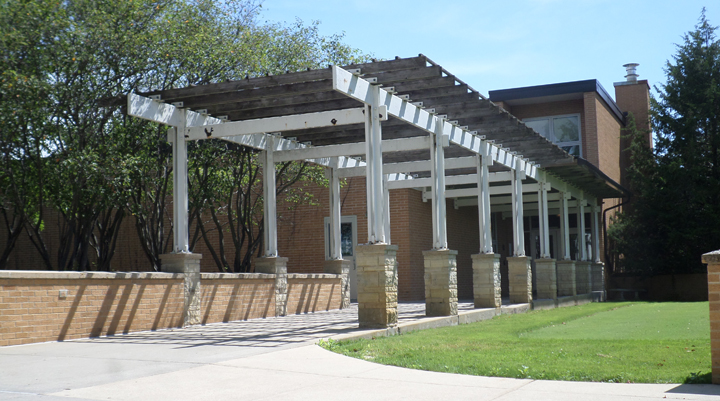 My most memorable moment in BH took place on the bottom level, where a computer lab was located. During a class there one day, the professor decided to rip apart The Collegian without realizing that one of the writers was sitting right there in front of him. So I responded the only way I knew how: I wrote another editorial. After that issue was published, the professor sincerely apologized and the matter was settled. This was the point in time where I realized that, even though I had a shy personality at the time, there was still a way for me to effectively express my opinions: in print.

Henderson-Wilder Library
I practically grew up in a library and I’m a bookworm, so it’s a foregone conclusion that I loved this campus library. My favorite part of the library was a room I only saw once. It has a name that I’ve long since forgotten, so I’ll refer to it here as the “relic room.” I was working on an article about notable UIU people buried in nearby Grandview Cemetery and was granted access to this glorious place. Inside this tiny, packed room was a history buff’s dream come true: old yearbooks, newspaper articles, film reels of football games, and more. If there’s one thing UIU does well, it’s preserving pieces of historical significance.

Henderson-Wilder features a towering statue of David B. Henderson. Henderson attended UIU, but cut his education short when he enlisted to fight in the Civil War (imagine this guy marching past Alexander-Dickman/Old Sem on his way to battle). He later became the first speaker of the U.S. House of Representatives from west of the Mississippi. Today, David B. looks better than ever thanks to some recent work.

Dorman Gym
Dorman Gym is named after Doc Dorman, who graduated from UIU and then came back to coach for more than 50 years. We all casually throw around the word “legendary” when we talk about coaches, but Doc Dorman is THE legendary figure in Upper Iowa sporting lore.

Dorman’s gym floor has seen players from all levels of talent. During my sophomore year, it played host to a raucous conference championship game (the Peacocks won) and an even rowdier NCAA Division III tournament game (the Peacocks lost). It also played host to intramural games which often saw fewer points and more bricked shots. I didn’t have a team during freshman year, so I became part of a squad of “unclaimed free agents” dubbed “The Leftovers.” Did we win any games? Nope. But it was still fun and I met two friends on that team, so it was worth it. 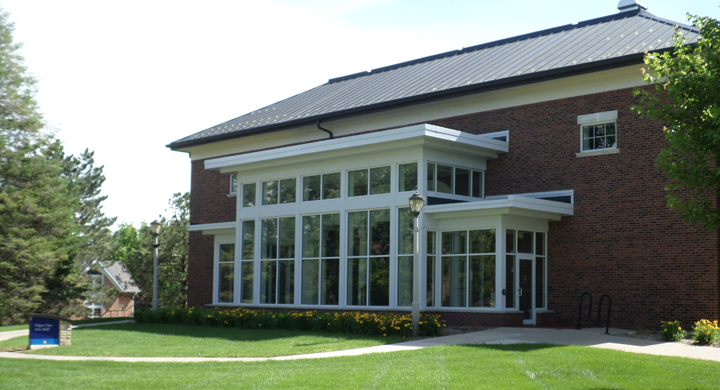 Edgar Fine Arts
Edgar Fine Arts was originally the UIU gym, which explains why there was a pool in the basement. Some of my friends always joked that they were informed of “an Olympic-size pool” when they made their campus visits in high school. To be fair, that was a true statement… as long as you understood that “Olympic-size” meant “Olympic-size in the 1930’s.”

As the name suggests, this building is where the creative juices really flow at UIU. A good chunk of my classes were held here, including one that still remains my favorite class of all-time: a cartooning class led by art professor Emmett Van Buskirk. I drew cats. I drew elephants. I drew a comic strip that included a fart reference. Those, my friends, were magical times.

The Path to Harms-Eischeid Stadium
On this gravel path, flocks of Peacocks have walked from Dorman Gym to Harms-Eischeid Stadium to battle on the gridiron. And on this path during a rainy Saturday my sophomore year, my frat buddies and I raced John Deere Gators through the mud as we gave rides to visiting alumni during homecoming festivities. We were told that our primary objective was to give rides to the elderly alums who had trouble walking, but I may have also given a ride to the entire cheerleading squad. Yes, the whole squad fit in the Gator at the same time, and no, I have no regrets. I like to think that I was helping keep their legs fresh for their upcoming stunts during the game.

Perpetual Motion
UIU is known for its numerous sculptures. My favorite was “Perpetual Motion,” located near Garbee Hall. Can footballs and Frisbees fit through those rings at the top? Only if your timing is spot-on. We probably owe an apology to the sculpture’s artist, Bruce Stillman. Those Olympic colors were just begging us to take a shot at athletic glory. 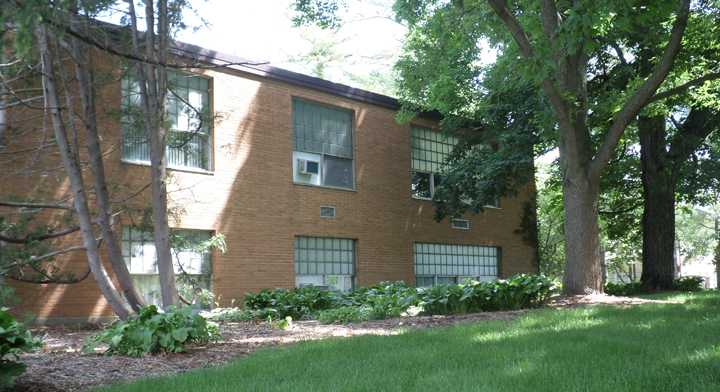 Colegrove-Walker (CW)
Sure, it’s not much to look at. Sure, the temperature was never comfortable in any of the classrooms. And sure, it’s allegedly haunted by the ghost of UIU alum/stage actress Zinita B. Graf. But still, this was a favorite place of mine. This was the home of The Collegian, UIU’s student newspaper. I started off as a writer, then moved up to assistant editor and finally editor, a position I had eyes on when I first walked in here and met newspaper adviser Dr. Doug McReynolds (a.k.a. “Doc”) on my campus visit during high school. 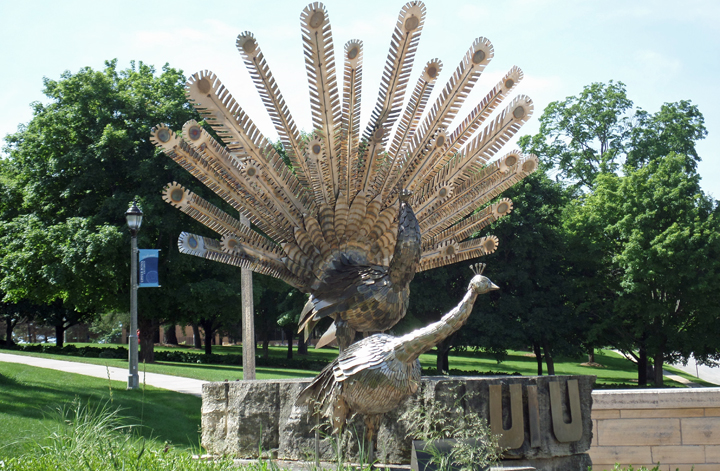 So there you have it – a virtual tour of a campus with virtually unmatched beauty. If you’re a UIU alum, I hope this trip down memory lane reminded you of some memories of your own. And if you didn’t go to Upper Iowa, no problem; feel free to explore the campus if you’re ever in Fayette, and we’ll gladly consider you an honorary Peacock.